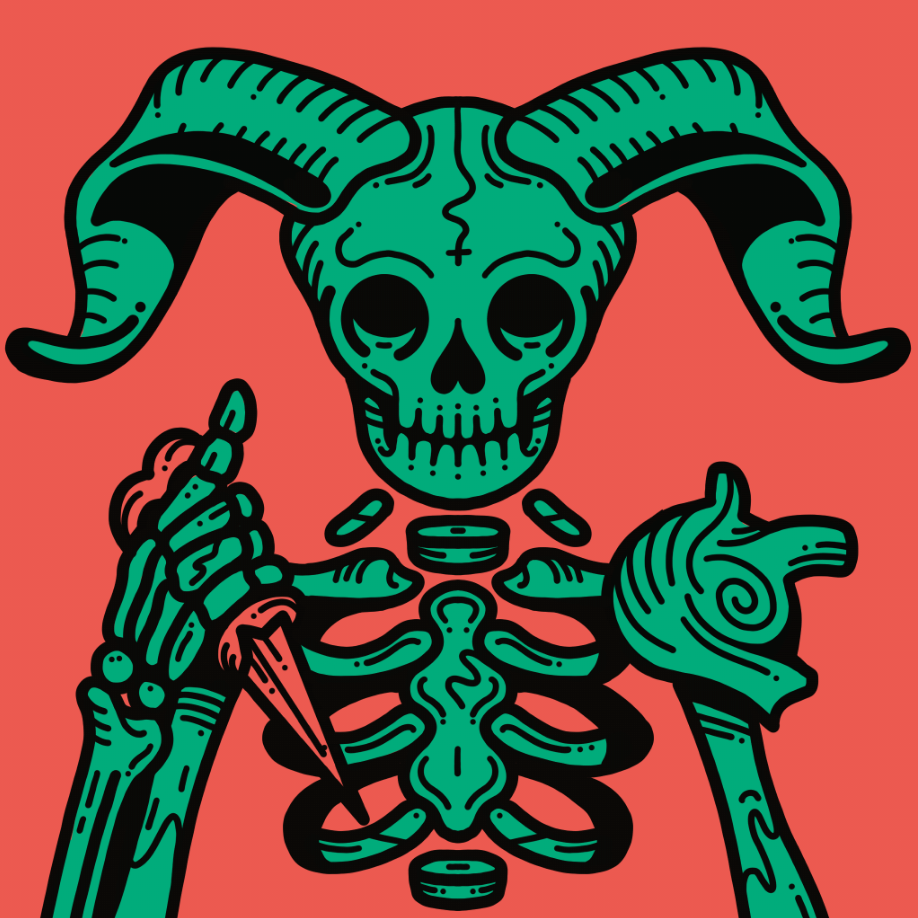 Recently a fellow DAOhaus core member reached out to me. They had worked on a project to recognize others in the DAO and asked for help distributing it as a NFT. It was important to her that she would not be compensated for it and it would be a surprise.

From her DM to me:

“… like an unexpected package at your front door. I also want it to be a gift and a morale boost for Warcamp and DAOhaus users. Discussing it ahead of producing it would remove the gift aspect.

It’s a bootleg zine, like the 8.5 x 11 folded in half kind for bands, and the title is Bear Eat Moloch. There’s a few articles, one about DAOhaus Diaries, another is a kind of Declaration of War against our fear of the bear market, a third is a sentimental one about community and the last is DAOhaus origin story…”

Thank you BorrowLucid(Chistina). She highlights the kind of creativity, altruism, and recognition that is one of the things that make our community and culture so amazing. She gives us a glimpse of our soul.

The DAOhaus core community is one of the best things I have ever witnessed. A shared group of some of the most talented people I know. We share membership in the DAO as founders, thinkers, builders, entrepreneurs, and friends.

This article was made to be printed like a punk zine and distributed as such. Here is the PDF pinned for your viewing/printing pleasure.

On May 10, 2022 Dekan, Sam and Ven hung out on Twitter Spaces, with earth2travis and TravisWyche, for DAOhaus Diaries.  Yalor and Kerp stopped by too.

DAOhaus Diaries is a regular event, hosted by E2T and TW, where we can just relax and hang out with each other.  This was the first of hopefully many.

We found out that Dekan never takes off his pants, Sam took his off during the event and Ven only wears pants for special occasions.  Yalor wears a spork jacket and roller blades; no mention of pants.  Kerp was in his almost-time-for-bed robe.

They also talked about Seinfeld.

Dekan and Sam agreed that you don’t have to give up on all the passion and ideology you had when you were a punk skateboarder kid and meeting up with your friends.  It’s expanded into Web3 and the metaverse.  (Maybe that's why I’ve been listening to more Rage Against the Machine since I started contributing to DAOhaus.)

If you’re not already planning on it, join us at DAOhaus Diaries.  Don’t make us miss you.

Bring on the fucking bear market!  Let it flush out all the bull-shit hype, ponzi schemes and pied pipers.

In the bear market, the DAOhaus community strengthens our foundations and builds modular and compostable inter-operable bricks, because that’s what we’ve been doing all along. Whether feast or famine, we fucking build.

We look out for each other.  We share learnings and lessons, hoping that others can move beyond our past mistakes.  We collaborate and contribute our best work.  Even when we don’t agree, we know that diversity makes us stronger and complex problems require complex solutions that often are only discovered when new perspectives are brought to the challenge.

There are many ways to organize, but we’ve chosen decentralization.  We know that it’s harder than centralized and top down structures and we like it. Every voice is valued.  Every perspective is necessary. That means you!  We’re better since you’ve joined us.

We don’t know everything, but we’re open about it.  We’re not trying to repurpose the same old shit from legacy structures.  Fuck those shortcuts!  We’re building something brand spanking new, damnit!

The bear will eat Moloch.  The channels will get more quiet and still.  The bull, who once rushed in erratic directions and kicked up blinding dust, is moving into the shade and about to take a long nap.  Let it.  As the dust settles and the air clears, those of us still here will be able to hear each other more easily.  We welcome the bear, whose melodies replace the bull’s static.

When the bear eats Moloch and our clothes are stained with blood, we get better at coordinating.

Dekan said something like, you can't manufacture that feeling of being part of a community, and earning your place, when you see yourself among equals and they see you as an equal, even when you’re not sure you’re good enough.

Sam is excited to build with all you guys and hope that other communities get to do what we're doing.

Yalor suggests that when you watch your net worth drop, you recognize that you still have a community, where real bonds are made, and things to work on.  The humans that are still around haven’t lost any value.

Ven recognizes that we’ve been able to maintain our values through all types of markets so far. A bear market makes us realize that we need each other.  It’s when we need to help each other out and work together even more.

It all started with Dekan giving crypto away to his friends, so they could gamble on Broncos games.  Before then he was making javascript games and trying out mining.

Ven, Sam and Dekan started going to hackathons and doing crypto work together.  They were interested in the original DAO.  They started to intentionally experiment among the three of them at being a DAO, pooling their funds from both clients and grants in a multisig, and called it Odyssy.

At EthDenver 2019, they met Pet3rPan, James Young and Ameen.  The first iteration of DAOhaus was called Pokemol, a pocket Moloch DAO, which evolved into an app for MetaCartel DAO.

At EthBerlin 2019, even though they didn’t win anything at the hackathon, people were starting to fork Pokemol.  That’s when they decided to launch DAOhaus as a platform.

Odyssy was such a great experience for Dekan, Ven and Sam that they decided to launch a dev shop DAO, called Raid Guild, at EthDenver 2020.  They wanted the hacking to keep going.

At that time Moloch DAO was 100 ETH to join, MetaCartel was 10 ETH, so they decided to set membership in Raid Guild at 1 ETH.  They also decided to allow new members to join.

Sam, Dekan and Ven balance each other.  Sam is the more pragmatic and rational one. Ven is more ideological and Dekan likes to experiment.  Dekan is the dystopian, Ven is the utopian and Sam is realistic.   Seeing their differences and recognizing that it can feel extreme, they acknowledge that the gem of DAOs is its center of gravity, which is the culture, humans and coordination, not control.

We envision a future where any community can achieve its goals while reinforcing the sovereignty of its members. We build technological and cultural tools empowering communities to coordinate.

We are rebels and visionaries. We rebel by building the future we envision. The rebellion is serious, but we don't take ourselves too seriously. We are comrades more than colleagues. We work with integrity, with people of integrity.

We cultivate a culture of good faith governance. We embed our values in our technology. Society is unbundling and DAOs are here to pick up the pieces. We attack the hardest problems to make the largest, scalable, positive impact.

Protocols should support humans, not the other way around. We try to embody the change we want to see without accidentally consolidating power along the way. We build tools that are fundamentally pro-social and enshrine solidarity.

We seek to put every member of a community in power, to distribute power throughout the organization. We know the infrastructure and tools must be considered alongside the social and cultural elements as they rely upon each other.

We don't take shortcuts. We build for long-term sustainability. We don't concentrate power for convenience.

We are here to empower people, to make their lives better, to give voice to those who did not have a say before. We know we can make a better future beyond all skepticism and cliché. This optimism drives results.

We are explicit about power as a topic of conversation. For us, power isn't an undercurrent or subtext couched in another objective. We preserve the agency of the collective organization and the autonomy of individuals.

We reward contribution to show our appreciation for the community. We support humans willing to commit. We provide opportunity for all who are willing to demonstrate value.

We are opposed to exploitation by obfuscation. We strive for transparency in our objectives and operations. We advocate for governance where the outcome of participation has a provable result. We stretch the bounds of our technology and put activities on-chain, giving governance as much hardness, security, and impact as possible.

We facilitate capture-resistant communities to support coordination without fear that others will extract value.

We design for composability. We build primitives so communities can assemble these modular building blocks around their own values and needs.

We foster pluralism. We avoid becoming too attached to our ideas by encouraging diversity of thought. This makes us resilient, accessible, and stronger together.

We are demonstrating viable alternatives for scalable coordination, collaboration, and value transfer. We continue to challenge the status quo by asking difficult questions. We understand that we have to go further than merely rejecting previous attempts

We eat our own dog food to demonstrate the power of experimentation. Failure is instructive, not something to avoid.

We ask forgiveness, not permission. Actions speak louder than words. We distinguish ourselves by what we do.

Human coordination is a matter of existential survival. We need these tools. We build them out of necessity.

DAOhaus aligns with Ethereum community values. We are here because we desire fairness and equality. We strive to foster ways of interacting that do not inflict violence, oppress, exploit, or extract. We believe in the power of purpose-driven communities.

We strive first to create value, not extract.

We strive first to collaborate, not compete.

We strive first to coordinate, not control.